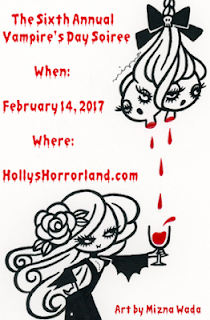 It's mid-February and once again, a very special day has arrived, and it's one that I always look forward to. No, I'm not talking about Valentine's Day. Instead, I'm referring to The Vampire's Day Soiree, an event which has been hosted by my blogger friend, Holly Strange, for six years now.

Since Ms. Holly liked the description of the event I used in my post last year, I hope that neither she nor of my readers will mind me plagiarizing my own material by adding it here once again:

"The Vampire's Day Soiree always takes place on Valentine's Day as an alternative for those of us with a darker outlook on things. Besides, what could possibly be more romantic than an encounter with the right vampire? No doubt, vampires are dangerous, blood-thirsty creatures, but they are also sensual and romantic."

If you'd like to participate in this event, all you have to do is follow this link to Holly's Horrorland and follow the simple instructions. Then, you write something on the topic of vampires on your own blog and link back to Holly's site. That's all there is to it.

As always, I like to celebrate The Vampire's Day Soiree by including a few paragraphs from one of my short stories. If I remember correctly, last year I took an excerpt from a piece called Horror in the Tunnel. At the time, I explained that the story would been included in my next book. For better or worse, I tend to be a slow writer and even my short pieces seem to take me longer to finish than they ought to. I also have far too many distractions. So, as I add something today from a newer piece of fiction called A Fall From Grace: The First Hunt, I'd like to say that I'm close to beginning publication on this next book. I refer you to the preceding post where I discussed my plans for the next publication. So, if you find today's entry a bit of a cliff hanger, please keep in mind that I hope to have my next collection of short stories available within a couple more months; that is, barring any unexpected complications. So then, and without further ado, here is my entry from The First Hunt, which incidentally, is the third in my A Fall From Grace series:


Suddenly, she averted her gaze and his vision ended abruptly, bringing her victim back to reality.
“Ugh!” He shouted, confused by the sudden cut off from the titillating experience. “Wh....what happened? Why don't ya do what ya want to and get it over with?”
“Because I got what I wanted,” she responded. “You just damned your god and everything you've ever stood for. I have now prepared you to enter the place that lies beyond the gates of Hell.”
Canton realized the truthfulness of what she spoke. He had indeed done as she'd said.
“You tricked me with all that sexy stuff,” he informed her. “You tricked me!”
Lady Andrea laughed heartily before responding. “Do you really believe that I'd want to provide you with pleasure after you smashed my Jessie's head with a rock, killing him? No, there is another who will have the pleasure of draining you of your life's essence, and I will lead you to him.”
She began walking in his direction; the self-confidant smile and hungry expression never disappearing from her face. The frightened man dropped his fishing tackle and moved quickly in the direction of the bayou, screaming as he ran. “Help! Somebody help me!”
Eddie Canton's gait outpaced his limited field of vision. More than once he blindly stumbled over the underbrush, only to quickly right himself and continue on toward the bayou.
Moving through the darkness, Eddie could hear voices calling to him from the direction of the camp. “Over here,” he shouted with a shortness of breath. “Over here!”
The thick woods abruptly opened up before him, revealing the same location where he had spent the last couple of hours fishing. As Eddie rushed toward the water's edge, a dark figure, as if from out of nowhere, took position directly in front of him, blocking his path. The dim light of the lantern shone upon the figure's pale features, and the panic-stricken man gasped in sheer horror.
“Je....Jessie? Is that you?”
The strange figure inched closer to him as he spoke. It's Jess of the House of the Crescent Moon now, Eddie. Are you surprised to see me?”
Canton attempted moving backward, but his escape was blocked by the woman.
“How can this be?” Eddie asked. “You're ….”
“Dead?” Jess responded. “Indeed I am; and yet, I'm standing before you. Pray to your god,” Jess continued, “for you too are about to join the ranks of the deceased.”
Well, there you have it; my contribution to this year's event. Please make sure to visit Holly's Horrorland in order to check out lots more vampire material. Enjoy!

Finally, I'd like to extend my thanks to Ms. Holly for once again hosting this unique event on her blog and website.