Nightmares From the Vampire's Lair 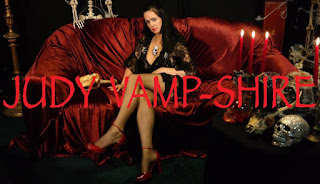 Several months ago I received a Facebook friend request from someone named Judy Shire. As is customary, I followed the link to her timeline before accepting the request. I arrived on her page only to have my level of intrigue immediately elevated by a timeline photo very similar to the one on the left. As a guy, I considered Judy alluring. As a goth, I found myself intrigued by the entire setting. After all, here was a beautiful woman dressed in black while sitting provocatively on a scarlet-colored sofa, which in turn, was surrounded by skeletons, skulls, candelabra, and other ghastly creatures of the night.. Further, I quickly learned that she calls herself Judy Vamp-Shire. What was there not to like? I accepted her friend request.

Judy Vamp-Shire is an entertainer from the U.K. During the weeks and months that followed, I learned that she was working on hosting an internet TV series called Nightmares From the Vampires Lair.

From time to time, she would post teaser trailers designed to keep her followers anxiously awaiting the arrival of her TV series. My favorite features Judy sitting in her lair when she decides to order a pizza. The delivery boy soon arrives and she attacks him (lucky guy), pins him down, and drinks his blood. After seeing that, I hoped her program would be available here in the States. Now, that may sound silly, but there are various internet productions from the BBC and other sources that are simply not available here--even on the net. So, I was quite pleased when Judy announced that her first program would be available here as of Halloween. Ah yes! What a great night for horror! That's what Halloween is all about.

What Judy actually does is host a weekly horror movie-- I'm talking about classic horror films. Think Vincent Price, Christopher Lee, and Peter Cushing. Although I don't believe any of the offerings so far have involved the old Hammer Films, some, such as House on Haunted Hill hearken back to the same era, or darn close to it.

So far, Nightmares From the Vampire's Lair has featured the films Horror Express, House On Haunted Hill, and The Little Shop of Horrors. Tonight's offering is Grave of the Vampire, which I plan on watching after I finish this post and fix myself something to eat. It's getting dark, so the time for horror has almost arrived.

In closing, I'd just like to say that I recommend giving Nightmares From the Vampire's Lair a try. It's
definitely something you should watch if you like traditional horror. I would describe Judy Vamp-Shire's hosting style as classic with a modern edge. You can find the program here
or on YouTube.

Oh, by the way! Judy is also a vocalist who has her own rock band. While I wouldn't quite call her music goth rock in the traditional sense, Judy calls it "vamp rock," and that's a very good description of what she does. Not only does she have an awesome singing voice, but her guitar player is pretty damn talented as well. Interestingly enough, Nightmares From the Vampire's Lair always ends with one of her music videos. So, I think it will be appropriate for me to close out this post with one of my favorites. It's called Welcome to Hell. Enjoy!