The Darkness Beyond the Misty Veil: More Tales of the Macabre 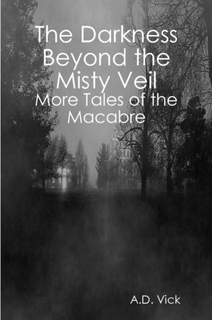 Back in February of 2016 I teased you with an excerpt from a story called Horror in the Tunnel. At the time, I said that the story would be published reasonably soon.Then, for this year's Vampire's Day Soiree, I teased you again with an except from A Fall From Grace: The First Hunt. At the time, I said that I hoped to have the story published by some time in the spring. Well, I actually accomplished that feat, but held back the announcement as I waited for the ebook versions to make their way through the network and later, the processing of a needed correction in the paperback version. So yes, it's now summer, but I'm very happy to announce the publication of my second book entitled, The Darkness Beyond the Misty Veil: More Tales of the Macabre.

This new publication contains seven stories, which for the most part, continue my custom of producing romantic horror. This time however, I'd have to say that there's a bit more emphasis on the horror. The stories are as follows:


The Reaper's Hand: This is the story of an old man who never found true love. He now runs from the Angel of Death.

Horror in the Tunnel: A man investigating an abandoned railroad tunnel finds more terror than he could ever have imagined.

The Caretaker: A cemetery caretaker finds himself caught up in a ghostly drama that had taken place over 150 years ago.

A Fall From Grace: The First Hunt: The vampire Lady Andrea takes her fledgling on his first hunt for human blood in a Louisiana bayou--and he's looking for revenge!

Highway 365: A paranormal investigator travels along an Arkansas highway believed to be haunted by a young woman on a stormy night.

The Arrival of Narkissa Laveau: After weeks of online interactions with an internet actress claiming to be a vampire, a young man, just out of college, decides to accept her invitation by meeting up at a cemetery in Fox Grove, a small community nestled deep in the Ozark Mountains.

I kept my promise to get the book published, even if this announcement is a bit late. I hope that I've sparked your interest in this, my second book. Still, in accordance with my intent to keep this particular blog commercial free, I'm asking that you follow this link
for further information and other links. Thanks for reading!

Posted by Nightwind at 10:22 AM No comments: