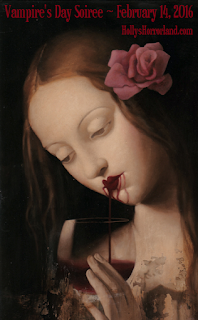 For the past four years, Holly B. Strange, who authors an unique and interesting blog called Holly's Horrorland,
has hosted an event that I very much look forward to. It's called the Vampire's Day Soiree and it always takes place on Valentine's Day as an alternative for those of us with a darker outlook on things. Besides, what could possibly be more romantic than an encounter with the right vampire? No doubt, vampires are dangerous, blood-thirsty creatures, but they are also sensual and romantic.  This year marks the fifth annual celebration of this special event.

All a person has to do to participate is to sign up and place a link to his/her own blog on the Ms. Holly's website,
add the photo on the left to your blog, link back to her site and post something about vampires. It's that simple--and it's fun!
Since vampires often make appearances in my fiction, I enjoy taking a special scene from one of my stories and putting it up here for everyone to enjoy. I know, it's a bit of shameless promotion on my part, but an aspiring author needs to find exposure somewhere. This time, I am taking a scene from a story I finished back in the fall. It's a somewhat Lovecraftian piece and it takes place in and under an abandoned railroad tunnel on the East Side of Providence, Rhode Island; H.P. Lovecraft's old stomping grounds. The name of the story is Horror in the Tunnel. As yet, it remains unpublished, but that's because I haven't decided just what I want to do with it. That said, I hope you'll enjoy my offering for this year's event:


My thoughts are interrupted by s spine-curdling scream. It's a woman's voice; possibly the source of the screams I heard earlier. I stand almost spellbound as I watch two of the ghoulish creatures leading a hysterical, naked woman to the central slab. Without hesitation, they force the struggling woman onto the central stone face up and set about chaining her limbs tightly to the stone's extremities.
I stare in amazement, wondering if I have stumbled upon some secret BDSM ritual. Yet, how could that be, as these repulsive creatures before me appear as real as anything I've ever seen. And the victim is clearly frightened, struggling.
Suddenly, the stately woman arises from her throne and for a moment, the drumming stops and an eerie silence falls over the cavern—a silence that is only broken by the captive's pleadings. “Please let me go. Please!”
As the woman in black takes her first steps toward the terrified female, the beating of the drums begins anew. This time, the rhythm is agonizingly slow as hands and sticks strike the instruments in unison once every three seconds or so. The sound echos throughout the chamber like some sort of death march as the obvious leader of the assembly walks toward the terrified person lying before her.
The drumming ceases when she reaches the panic-stricken prisoner. The woman looks down at the young lady affectionately as she gently brushes back her hair and strokes her face. The girl is whimpering amid hysterical cries. “Please, please!”
I realize that something sinister is happening here as I contemplate the possibilities. Clearly, this is no consensual ritual; at least, not as far as the woman on the rock is concerned. Yet, I feel a certain excitement when the lady in black bends over and whispers something in the girl's ear. I watch in amazement as she begins moving her lips slowly and sensually along the captive's neck. Before long, she ceases her movement and lets her lips linger, kissing her victim passionately. The affectionate attentions of the woman in black seem to calm the young woman down as she begins moaning ecstatically, offering her neck to her captor's passionate caresses. I find the scene before me both unnerving and yet, exciting, as my mind fills with conflicting feelings of guilt and arousal.
The sinister woman's ministrations continue for several minutes until finally she backs away from the now still form lying below her. A crimson liquid covers part of her face and runs in streams from her mouth until she wipes it away with a hand, which she in turn, licks hungrily.
Oh my God! She bit her. She tore open the flesh of that poor girl and drank her blood! What the hell's going on here?
Without warning, the slow drumbeat commences once again as the first of the ghoulish creatures, which had led the young victim to the stone, steps before her limp body. The second hands him a colorful but folded and elongated piece of cloth. He at first, holds it above his head for all to see. Then, he carefully places the fabric on the stone next to the young woman's body, where he begins unfolding it. Within moments the content of the package is revealed as he lifts a fearsome looking dagger above his head. The assembly roars in approval, but the sounds emanating forth form a chorus of ghastly, ungodly moans--sounds capable of making the bravest man's blood run cold.
The chamber becomes quiet once again as the creature lowers the knife toward the young woman's body. Although my body is almost stiff with fear, I cannot stand by watching this spectacle any longer, and I react without thinking of the consequences.
“No, no! Get away from her you bastards!”
My hand reaches into my coat pocket and within a matter of nanoseconds, my weapon is out and I aim it at the creature with the dagger. Two shots ring out in rapid succession. The ghoulish thing drops the dagger and reaches for what must have been a wound in its left arm while the rest of the assembly seems caught off guard. All heads turn in my direction as I struggle to take control of the situation by shouting at the gruesome beings once again.
“Get away from her!”

There you have it! That's my offering for today's event. Don't forget that there are links to other vampire material at Ms. Holly's site. And who knows just what she will have up her sleeve? Have a good time! Oh, and many thanks go to Holly for hosting this event.

Once again, here's a link to Holly's Horrorland.
Posted by Nightwind at 9:19 PM 24 comments: