Her Memory Lives On 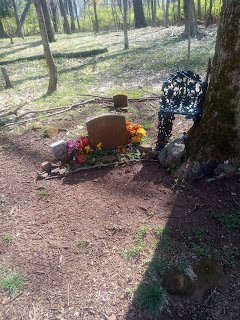 Nearly eight years ago, I did a post here about Sally, a person interred at one of the nearby cemeteries, which at the time of writing, was abandoned. A lot has changed since April, 2013, but one thing that hasn't changed is the mystery surrounding Sally, a girl or woman of whose life and last name, we still know nothing.

Since that time, a group of people have become interested in that abandoned graveyard. Some years ago, the property owner deeded about 1.28 acres of the abandoned burial ground to them, and they have put a lot of time and energy into resurrecting it. Though their restoration effort is not complete, the area is easy enough to walk in now that the cemeteries play host to a fair number of visitors.

A couple of days ago, I was tending to the small cemetery that I am responsible for when I noticed a colorful display over by Sally's grave marker. Thinking it might be trash, I headed in that direction. It was the above scene that greeted me upon my approach. Not only had Sally's life been commemorated, but her burial place had been enshrined. 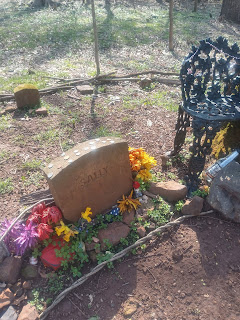 If you look to the right, below the chair, you'll see a bottle resting against a large stone. In the bottle is message written on paper, which thanks the owners for taking care of the graveyard.

It will be interesting to see how the cemetery group responds to Sally's shrine, as they have a work day coming up in a couple of weeks. As for me, I was just tickled to see such a neat outpouring of interest in keeping her memory. There will likely, always be a mystery surrounding Sally, but her memory is most definitely being kept alive.

Posted by Nightwind at 3:59 PM