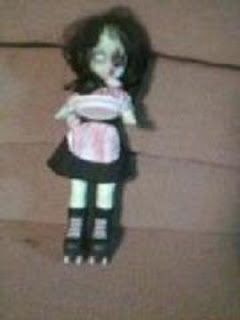 Although I never played with them, I've always had a certain fascination with dolls--from a distance, at least. I always thought it was interesting to watch how girls would play with them, dress them, nurture them and treat them as if they were alive and invited dinner guests. One lady friend, whom I used to visit regularly, had a small collection of dolls that she kept behind a glass encasement. The figurines, which had apparently been passed down from mother to daughter for generations, were destined to one day fall under the care of her own child. Within my friend's doll collection were examples of marvelous craftsmanship, style and elegance from years gone by. No wonder she wanted to keep them safe until her daughter was old enough to appreciate them!

Last year, I joined a local tea society that meets in a room at our public library. At these gatherings we generally sit around, drink tea, eat munchies and talk about our various creative endeavors. The interesting thing about this group is that several of its members are involved with Japanese Tenshi Dolls. They make them, outfit them, give names to their creations and sometimes, even create histories and mythologies for their favorite marionettes. Several of these dolls clearly walk on the dark side as is evident from their style of dress and antics. One of my favorites is a rather tall young man who delights in holding a chainsaw--its tip drenched in blood! It's often the case at our monthly gatherings that the dolls, which also sit at or on the table, often outnumber the humans. Well, at least they don't eat the food; or do they? Hmm...sometimes I do wonder about that as our scrumptious tidbits seem to disappear quite quickly when we're not looking.

A few years ago I discovered a website called New Age Dolls, which I link to from this blog. The owner of the site, a Canadian artist named Jade Perez, delights in the creation of a very bizarre assortment of creepy dolls. I laughed out loud as I browsed through her galleries and viewed a variety of tortured souls she had hand crafted. There was one particular figurine however, that really caught my eye. Her name was Zee and I liked her so much that she served as inspiration for one of my short stories entitled Jessica, which tells a tale about a creepy doll and her uncanny boyfriend. At the time, my intention had been to request a Zee remake so I could be the proud owner of such an unusual but magnificent marionette. As it turned out however, I suddenly found myself without a regular job and...well you know, the best laid plans and all that.

More recently, while at the local mall, I noticed that one of the retailers I frequent had a small collection of Living Dead Dolls. One in particular caught my eye and her name was Peggy Goo. By looking through the clear plastic box covering I could see that she had soft black hair, which barely covered up a missing eye and the subsequent blood oozing from its socket. She wore a short black dress, which was partially covered by a bloodied white apron. The information on the packaging indicated that she was a car hop--a dead one I might add!

Although I wanted to buy Peggy right then and there, I knew that I couldn't justify the purchase as finances were going to be a bit tight for a few weeks. Sadly and reluctantly, I put her back down and left the store, determined to return another day. On my next trip to the mall just a couple of weeks ago I went back to the venue where I had first found Peggy. At first, I didn't see her as I scanned the small shelves of the living dead that faced me. Disappointed, I began moving the front specimens around, just to see who or what might be lurking behind their coffin-like boxes and suddenly, there she was; hiding in the very back! I couldn't believe my luck; because of the several Living Dead Dolls present, she was the only one selling at a discount--50 percent off! What a deal!

The next day was the monthly meeting of our tea party and Peggy proudly took her place on the table with the other dolls. She was a big hit in her roller skates holding a bloody brain on a serving platter. She's a most welcome addition to my home and seems quite at ease standing on the top of the cabinet with various other representatives of the macabre.

As for Zee, I still hope to acquire her; but in the meantime, Peggy has certainly filled an empty space in my heart.

Please note that the beginning poem in italics is not my own but rather, is likely the intellectual property of Mezco Toyz.
Posted by Nightwind at 7:04 PM